The chairman of Winchfield Parish Council has been recognised for his 40 years of service. At the WPC meeting in April 2022, Andrew Renshaw was presented with a scroll outlining some of his achievements. Included in his 40-year service as a councillor is his 24-year term as chairman.

The wording on the scroll, which was read out at the meeting, appears below. The scroll was signed by Andrew's fellow parish councillors and the clerk who are pictured above with him.

"He campaigned on a number of issues, including resisting development. As his election address said, “Remember that Basingstoke, Yateley and Hook once had green fields like ours”. This rather set the template for the next 40 years.

"Andrew became chairman of Winchfield Parish Council in January 1998. It is a role he continues to fulfil with passion and commitment on behalf of the whole community. In 2015 he was elected as a Hart District Councillor and went on to serve four years, wanting to be as close as possible to the decision-making processes of the planning authority at a time when Winchfield was being actively targeted as the site of a new town.

"Over the past 40 years he has been a stalwart campaigner against wholesale development in the village which would have destroyed its history and charm and in so doing has resisted any opportunity to monetise his own assets. While the so-called Shapley Heath ‘garden settlement’ threat remains – it is on hold but has not, or at least not yet, gone away we can be assured that Andrew will continue to declare his interest as a land-owner – of land which is not for sale.

"However, he has welcomed and encouraged development where appropriate, including the development of Beauclerk Green on a brownfield site, formerly the station goods yard, where a huge industrial stone-crushing plant had been initially proposed and would have been very detrimental to the village. In the end, this battle was won and 48 homes were built at Beauclerk Green in the mid 1990s including 15 for Haig Housing Trust who provide affordable homes for ex-servicemen.

"More recently he encouraged the community to accept the siting of two solar farms in the parish which have provided the parish council with £60,000 over the next 15 years, monies which will be used to enhance the footpath network and other projects that will benefit the whole community. His commitment to the production of the inaugural Winchfield neighbourhood development plan resulted in an overwhelming vote of confidence with 96% voting in favour of the plan on a turnout of 62%, one of the highest in the country.

"His leadership of the Parish Council enables the public to engage openly and his even-handedness, compassion and innovation have made a significant difference to the village.

"Winchfield is a small semi rural village of around 650 residents and Andrew knows most people by name, supports  all local events and a strong community spirit thrives.

"A lifelong passion for cricket is Andrew’s recreation and for a number of years he was a Vice President of Hampshire County Cricket Club and President of Eversley Cricket Club.  Andrew has written or contributed to several highly respected books about cricket, including the acclaimed Wisden on the Great War: The Lives of Cricket’s Fallen.

"As a farmer – although now largely retired – he is a committed conservationist and supports organic farming methods. These and many other examples mean that Andrew is highly respected for his integrity, discretion, leadership and engagement across the whole community.

"On behalf of all the residents of Winchfield, we owe you a debt of gratitude for your untiring dedication and service to our community – thank you Andrew."

Winchfield Parish Council with Action Hampshire conducted a Housing Needs Survey as part of the revision of the Winchfield Neighbourhood Development Plan. We wanted to know if you, or anyone in your household, needs Affordable Housing.

Affordable houses are homes that can be rented or part bought (shared ownership) from a Housing Association. If a need is identified and there is clear support from the community, and a site (known as a Rural Exception Site) is available, then provision of a small number of affordable homes for local people can allow current and future generations to remain or return and help our community to thrive. There would be no ‘right to buy/right to acquire’ on these homes so they would always remain available and affordable for local people.

A Community Engagement Meeting was held at Winchfield Village Hall on Sunday, 20 February, from 3pm to 6pm, when the results of the survey were discussed. The NDP Working Group outlined their proposals for the revised Plan and continue to invite your comments and suggestions.

For any questions you may have, please contact: cstrudwickwinchfieldndp@gmail.com

Coffee Mornings are held in the Village Hall on the first Friday of most months from 10am until noon.

Since the first coffee morning in 2014, more than £12,000 has been raised for a wide range of charities.

Everyone is very welcome to attend these coffee mornings. They are not restricted to residents of Winchfield, and indeed, people come from near and far to enjoy the coffee, cakes and conversation. Just drop in at the village hall some time from 10am onwards!

Litter Picks are normally held twice a year and the next one will be held in the autumn.

Efforts are being made to revive the Hartley Wintney Twinning Association of which the parish of Winchfield is a member. The HWTA has a relationship with Saint-Savin in France and Malle in Belgium, but was dissolved in recent years. Malle is twinned with a town in Poland which is about 50km from the Ukrainian border and they have sent lots of support to them.

The inaugural AGM of the new body will take place at 19:30 on 27 April at the WI Hut in Green Lane, Hartley Wintney, and residents of Winchfield are welcome to attend the meeting. For more information and to notify attendance, please contact Gerda Bennett at gbt58@btinternet.com

Defibrillators have been installed at the Barley Mow pub and at the Village Hall.

Drag Hunt: The Staff College and RMA Sandhurst Drag Hunt crosses our fields for two or three meets each season. This is the oldest drag hunt in the country and we welcome them to Winchfield.

You can read more about the drag hunt here: http://www.sandhurstdraghunt.co.uk/ 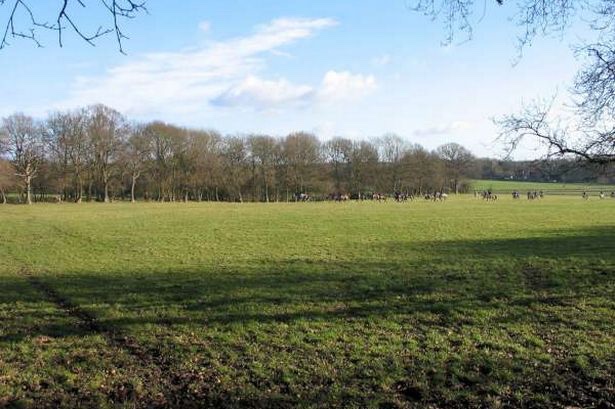